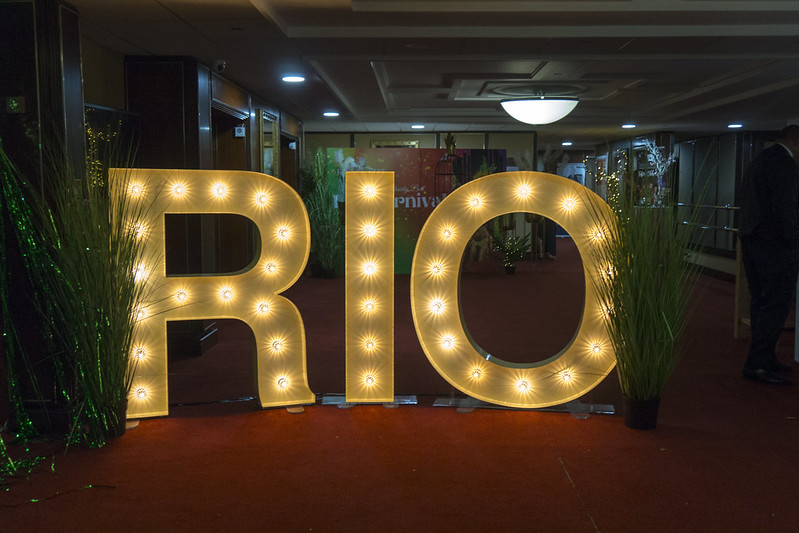 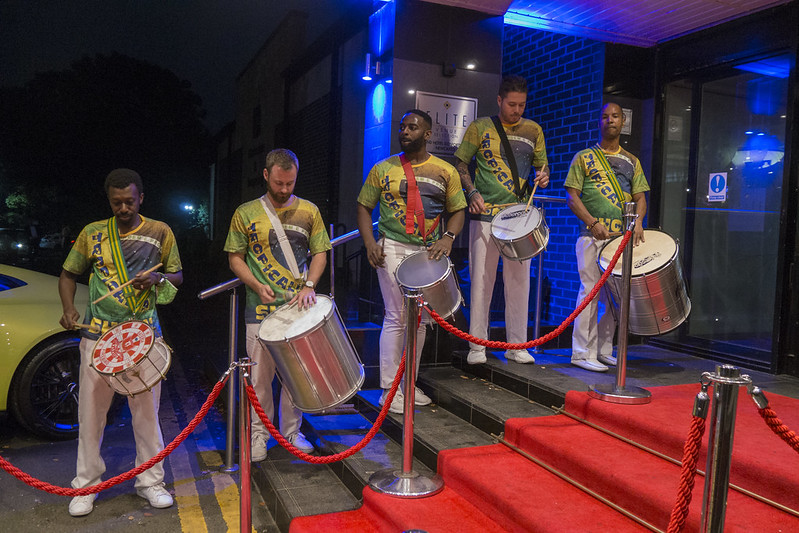 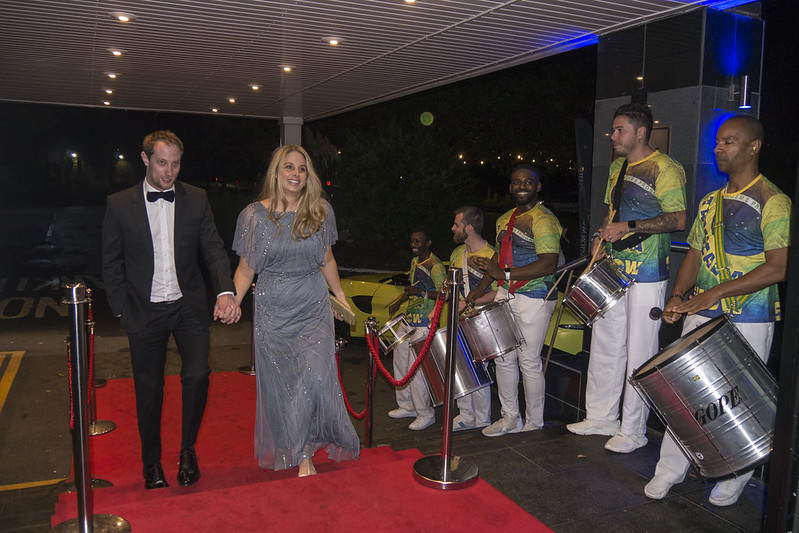 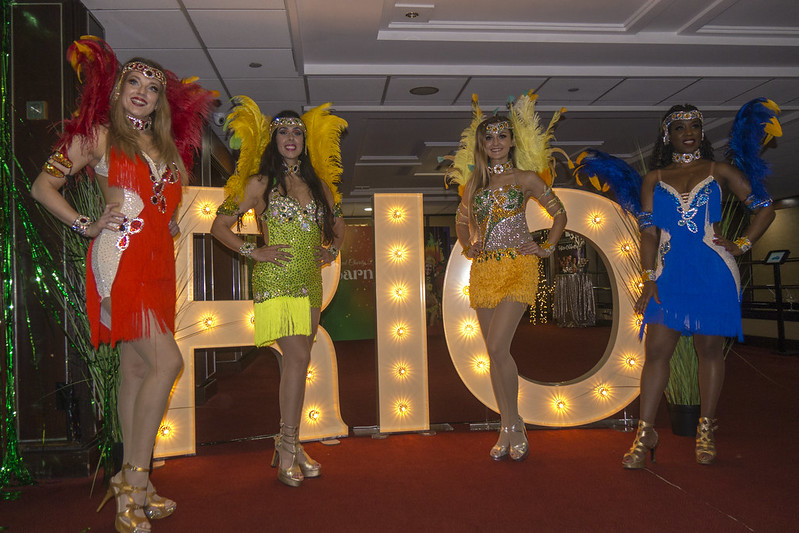 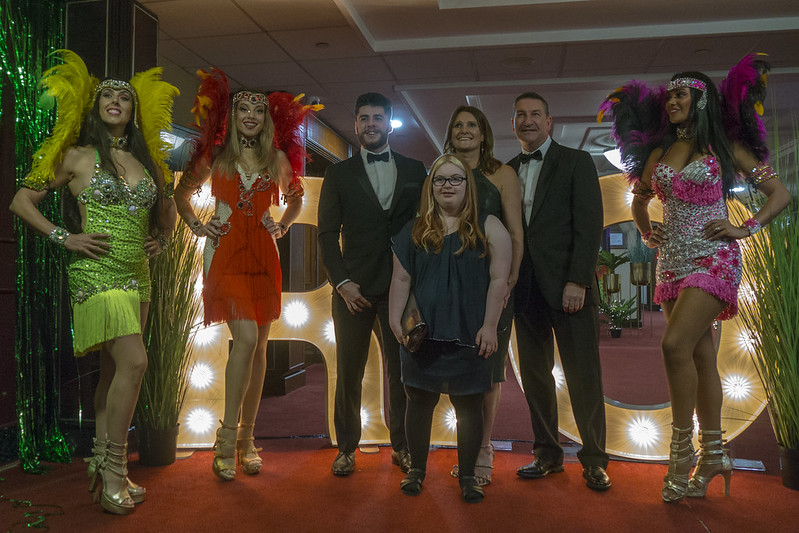 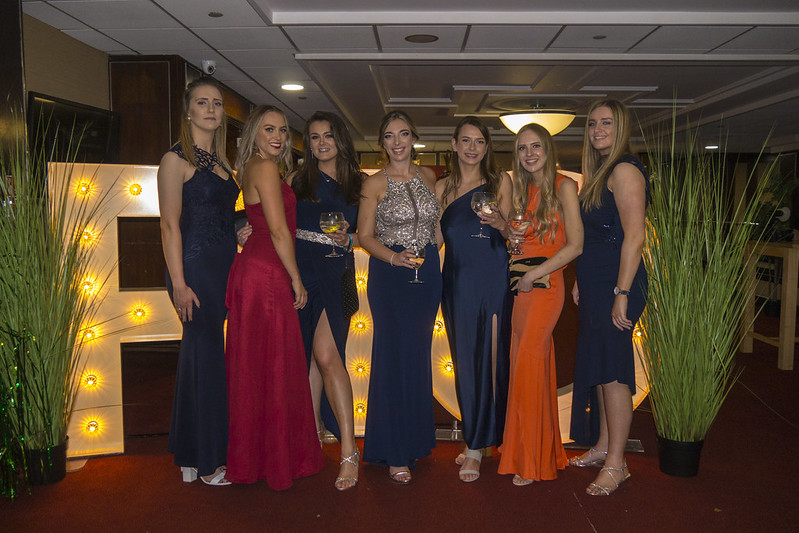 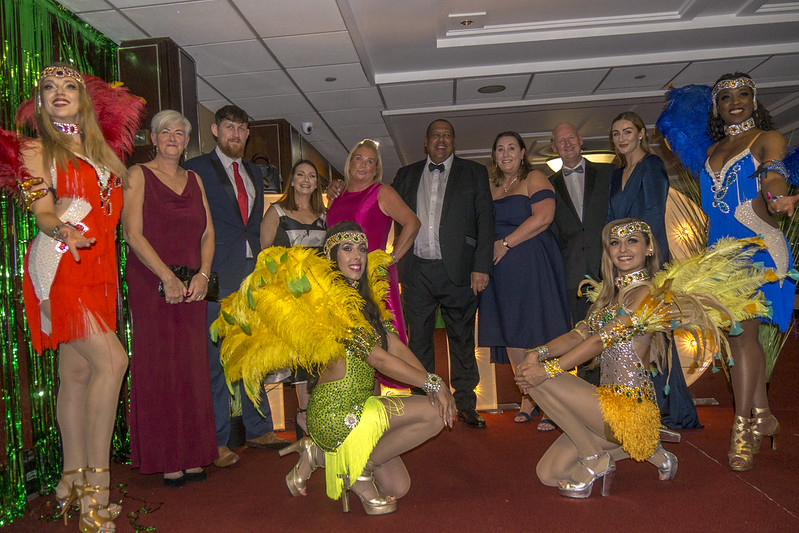 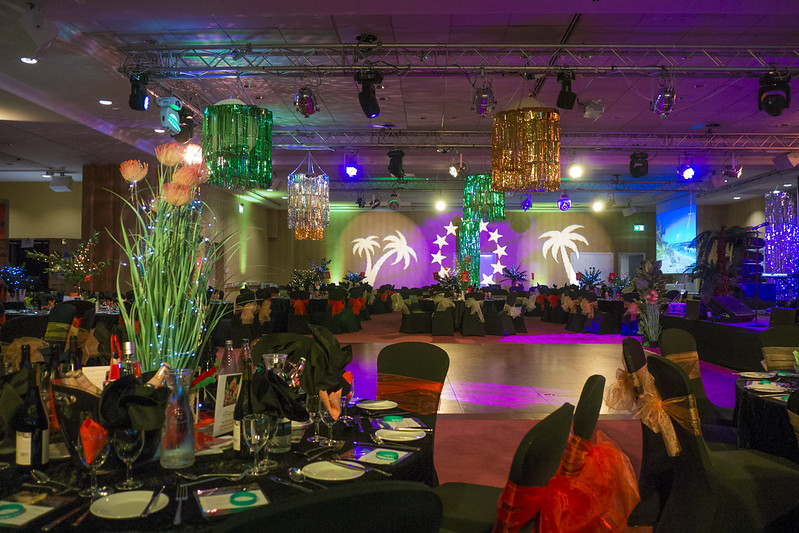 Pathways 4 All celebrated their 10th Charity Ball Rio Carnival style!  With carnival drummers, singer and Brazilian dancers, creating a great party atmosphere.  This charity ball, on Saturday 9th October 2021, was the rescheduled date from the previous year, which was cancelled due to covid.  It was fantastic to be back and for so many people to come out and support us.

Guests were greeted at the entrance by a 5 piece Samba band, drumming at the door and a group of ladies wearing their full Brazilian Carnival costumes.  Guests enjoyed their welcome drinks in the lower bar area, watching in ore as a couple performed acrobatics on a small central stage.

As the evening developed, guests enjoyed the carnival-style entertainment, 3-course meal, and a few fun competitions too! 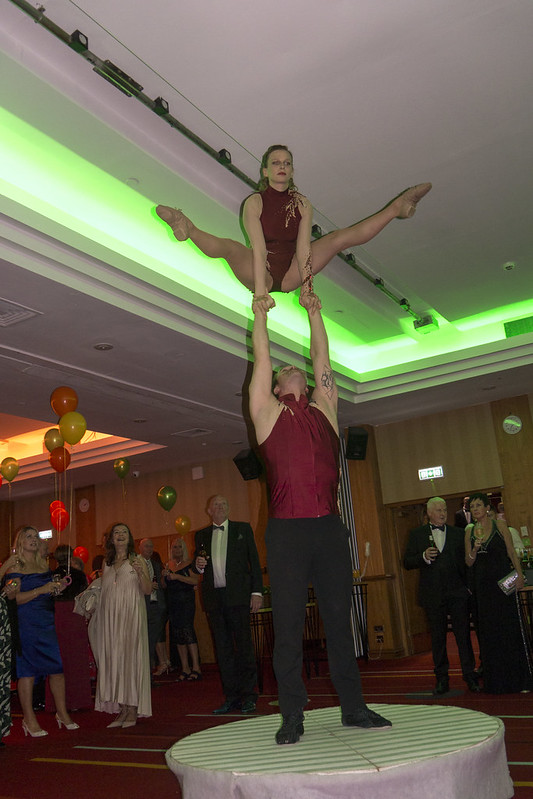 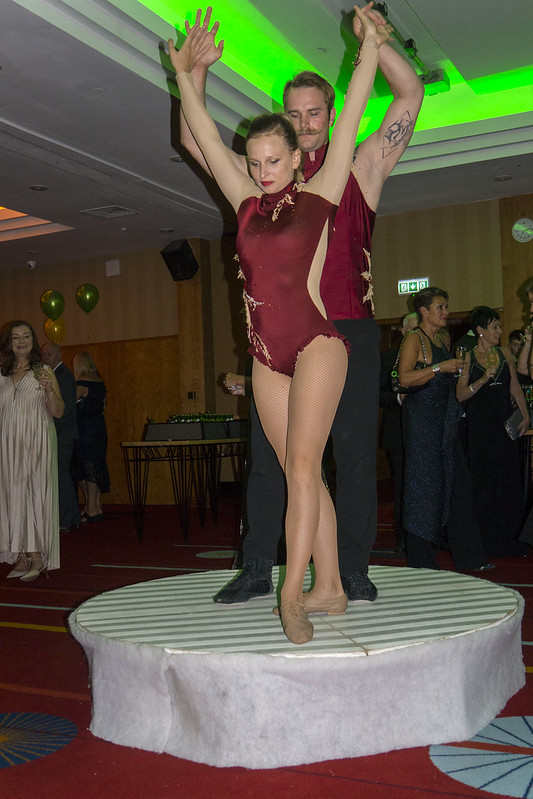 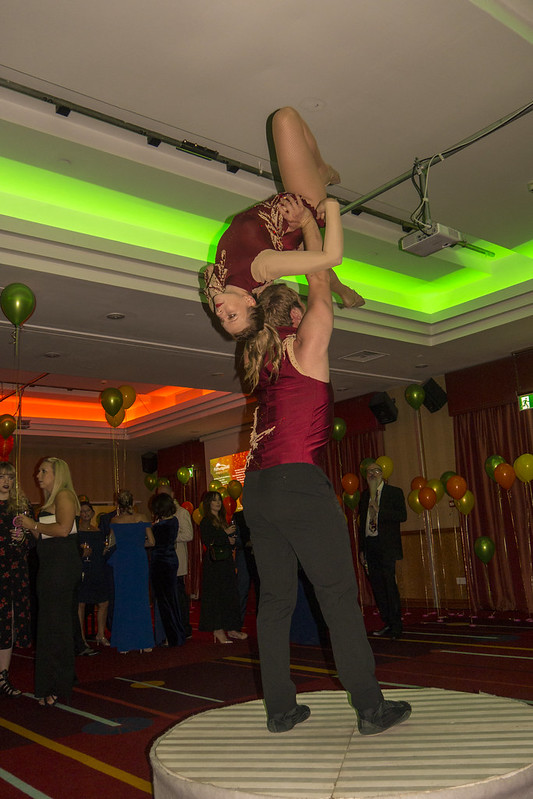 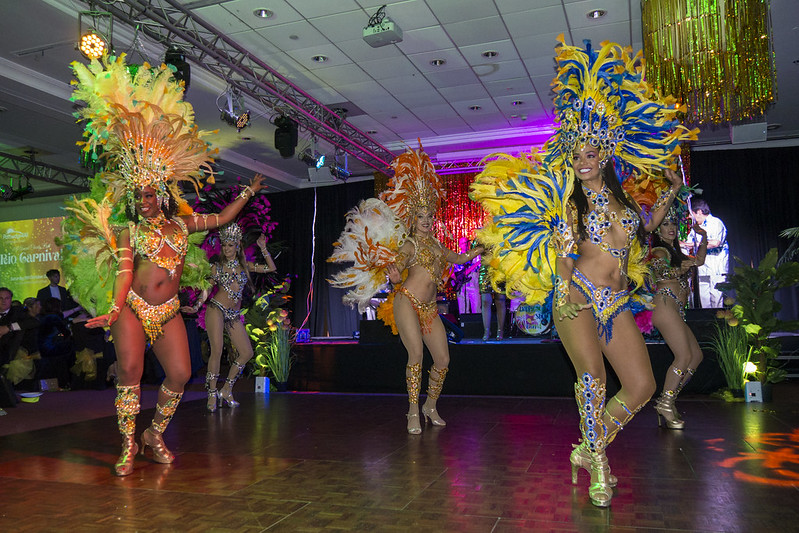 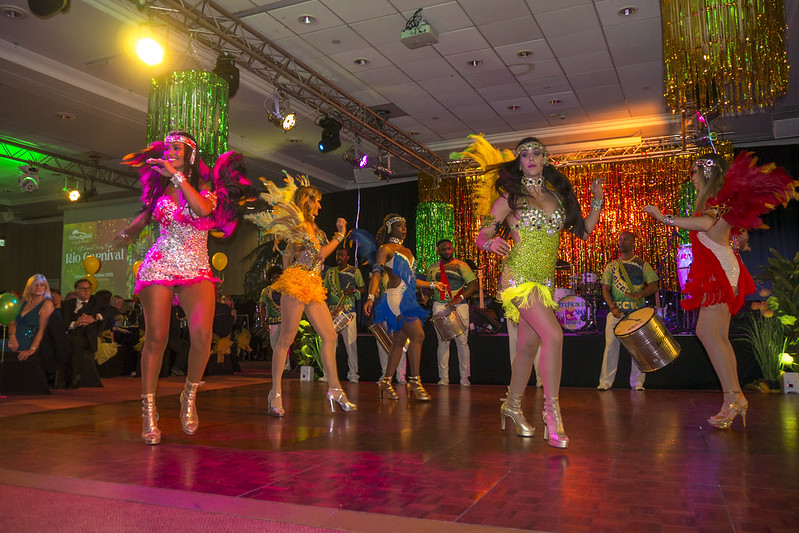 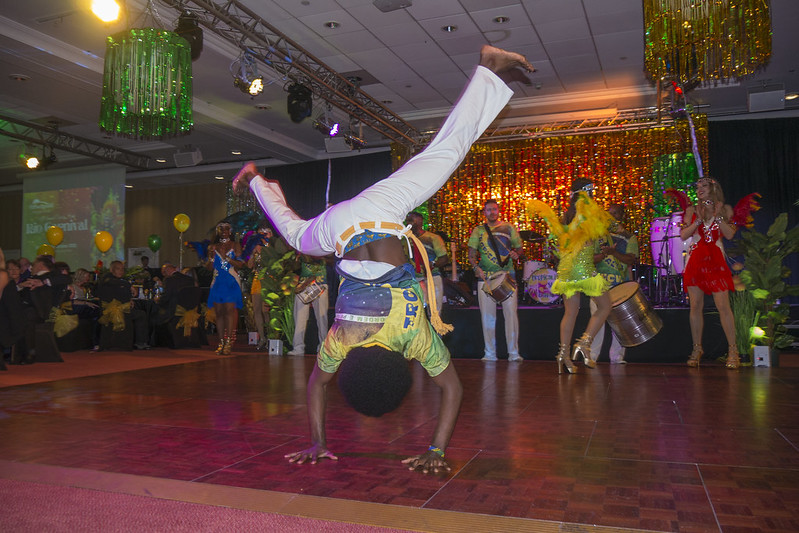 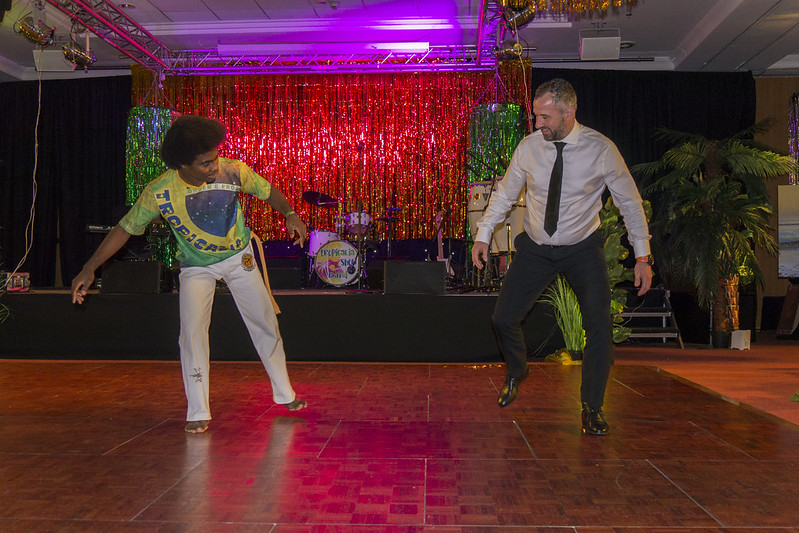 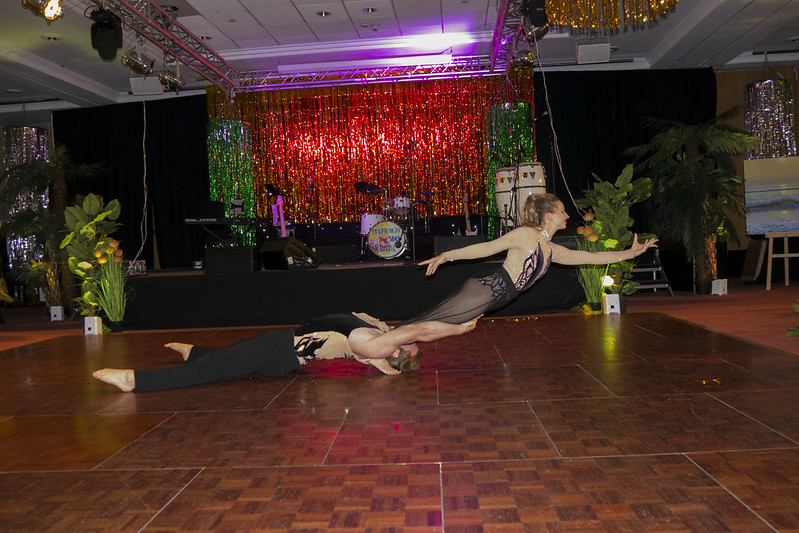 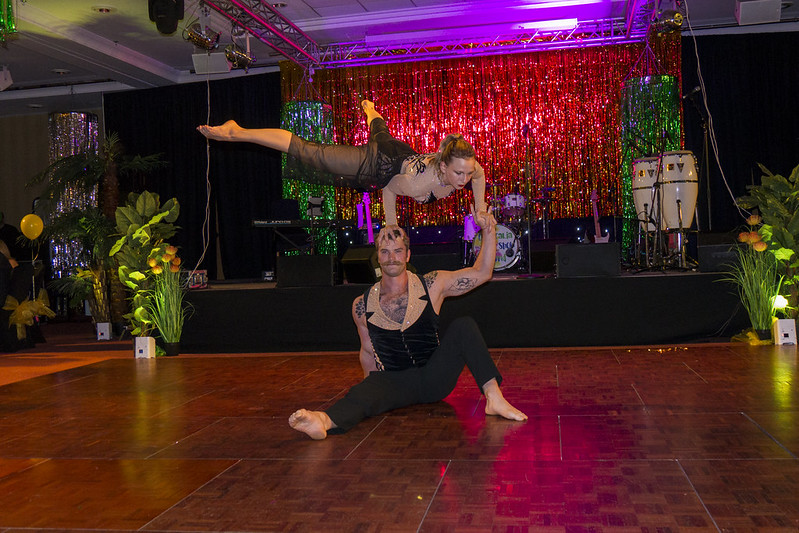 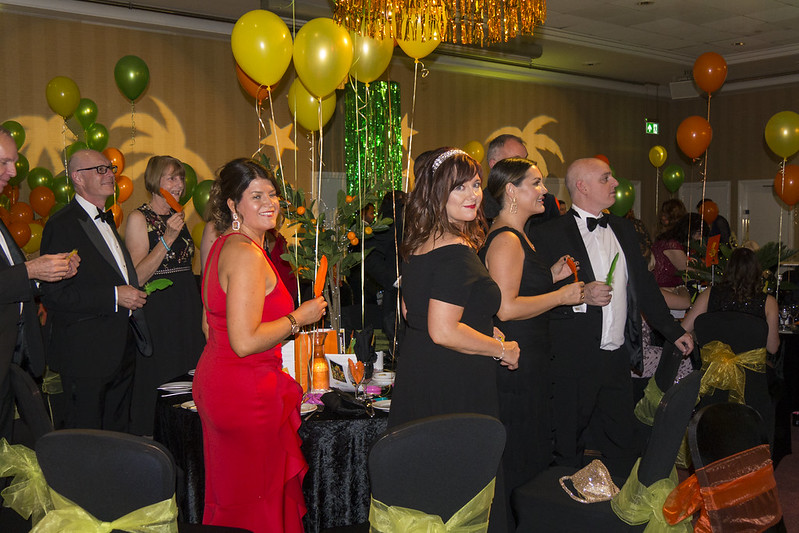 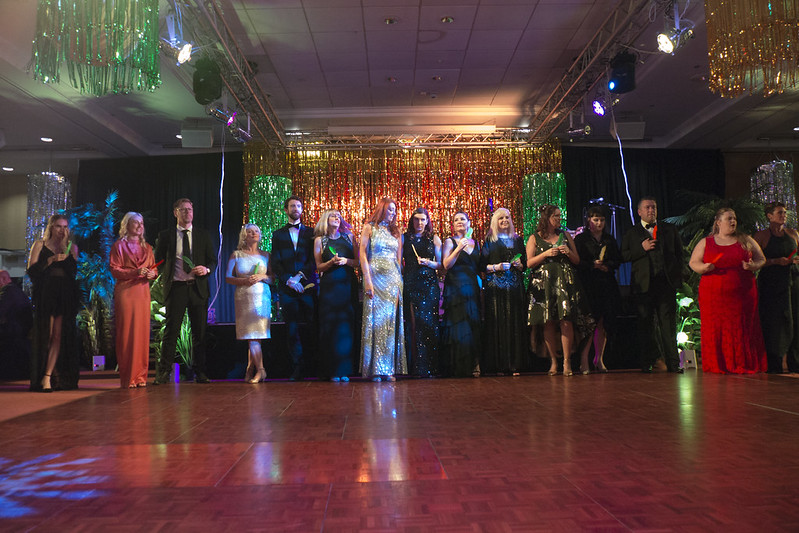 Central to the evening’s fundraising, the charity auction never fails to disappoint.  With prizes including a weekend loan of an Aston Martin Sports Car, a Meet & Greet, plus shirt presentation with Newcastle United’s Allan Saint-Maximin and a host of other valuable and/or unusual prizes, plenty of money was raised.

Two of the biggest money raisers worthy of a mention were a feather headdress and a football.  The headdress was hand-made by some of our young members and raising a fantastic £6000.  The football, was a standard plastic ball placed in a display box, it has no monetary value yet it has helped us raise thousands over the last 10 years.  “The Ball that Bounced Back” was offered as a loan item for a year; a symbol of support for our charity.  Over the years the football, as a stand alone item, has raised between £55 and £50,000.

For several years the football has been won by the same company, who return it ready for the following charity ball and then outbid everyone to ensure they win it again.  This year was different however, being our 10th charity ball, we auctioned the ball to keep.  For it’s final outing the presentation football raised another £20,000, bringing the overall total raised from this one item up to an astonishing £190,955 over the last 10 years!

We are delighted to report that the ball will now have a permanent home with the company who have loaned it for the last few years and helped us raise the majority of the money.  We are deeply indebted for the company’s ongoing support of our charity. 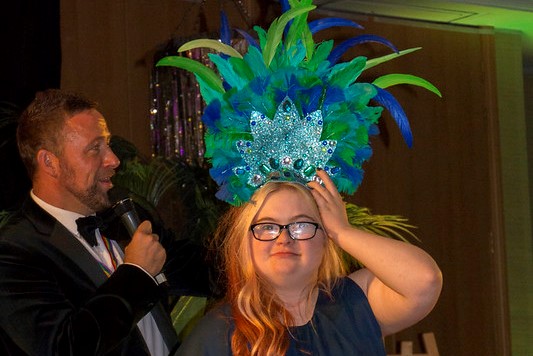 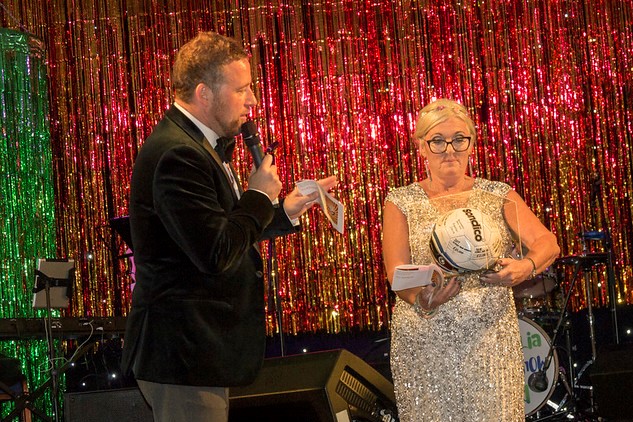 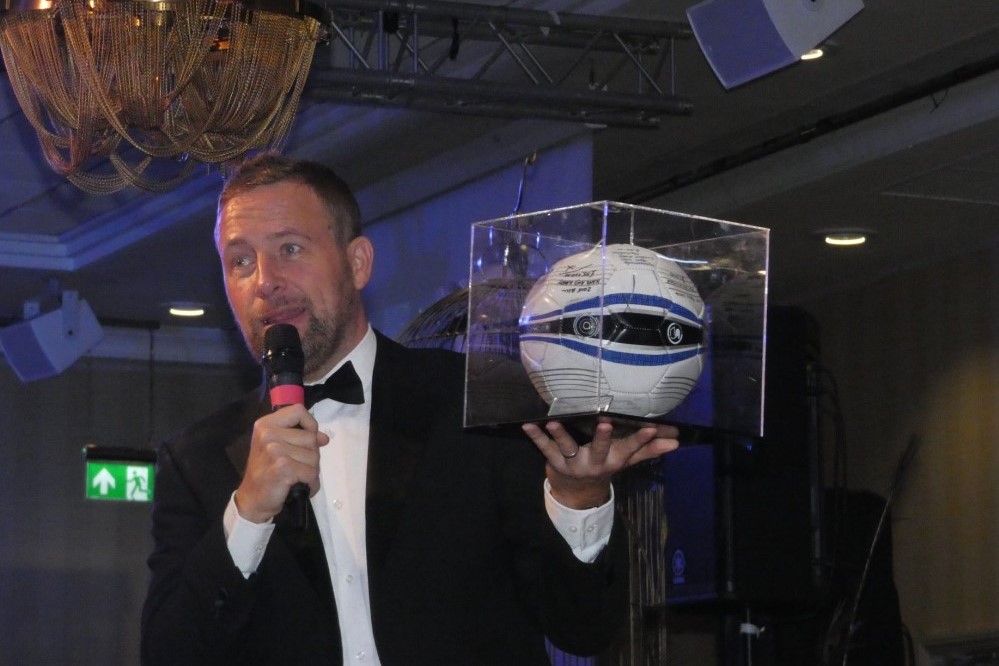 Once again our charity ball proved to be a huge success, raising a fantastic £58,000 on the night.  The evening was tinged with a little sadness however, as Lynn McManus, (our charity founder and our voluntary CEO), announced that this was going to be the last ball she planned to organise.  Lynn, with the help of her family, has voluntarily organised each of our 10 charity balls and in doing so, she has raised in excess of £476,000.  But this involves a huge commitment of time and energy, so Lynn has gracefully said this would be her last.  Although there won’t be a ball next year, our team have many new fundraising ideas, so please keep watching this space! 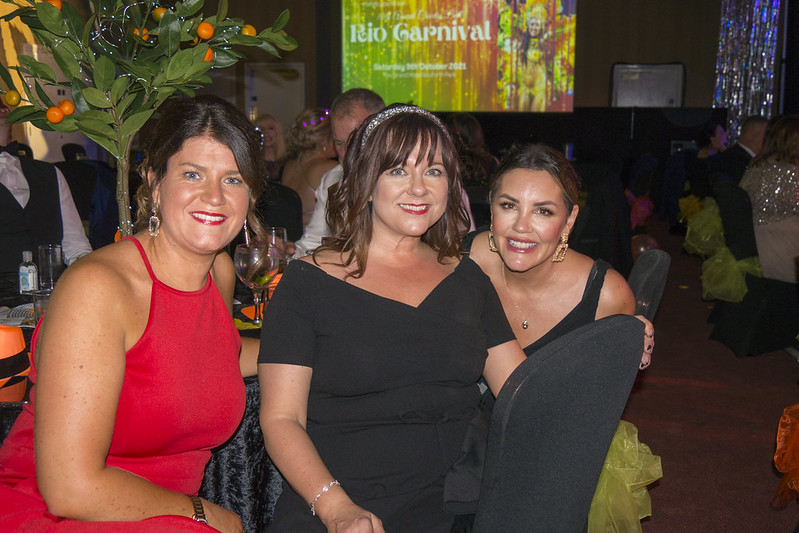 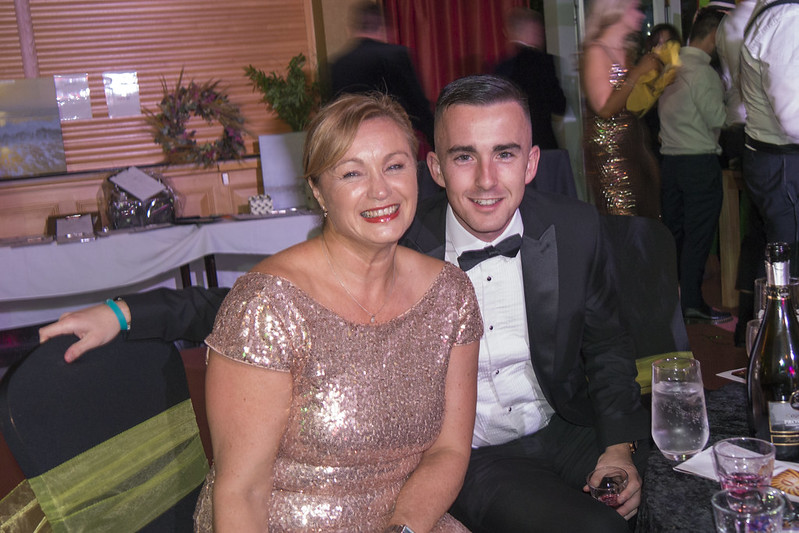 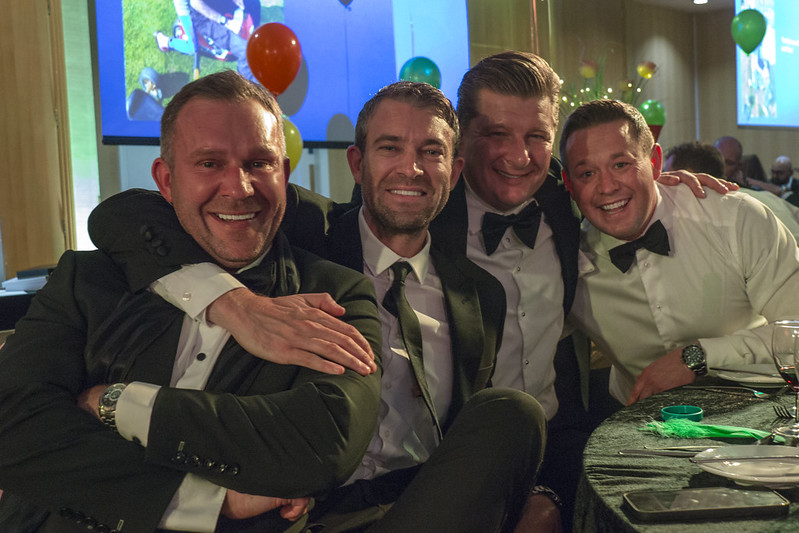 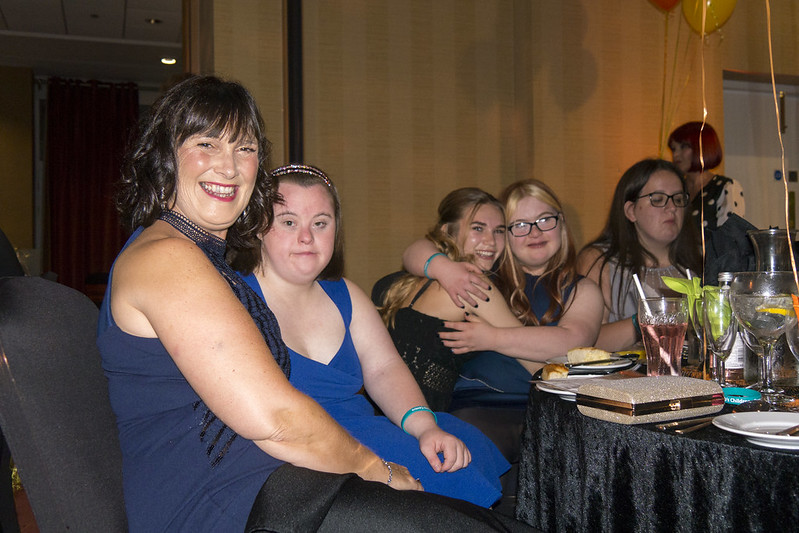 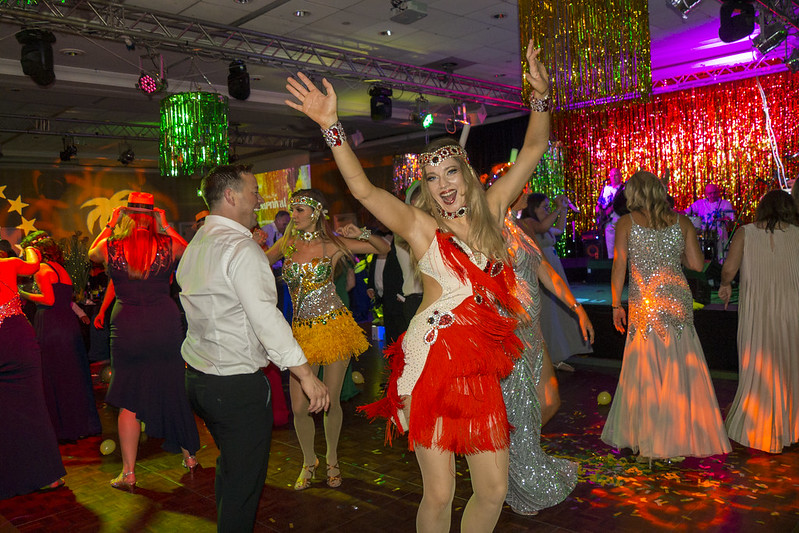 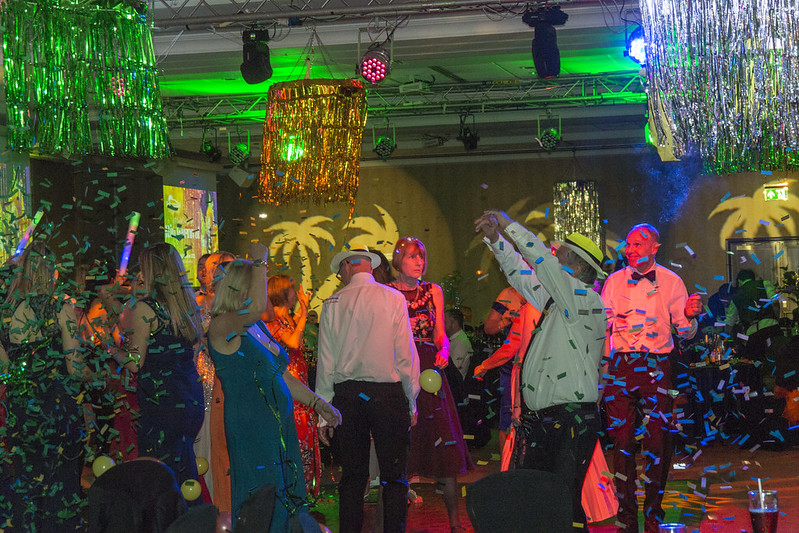 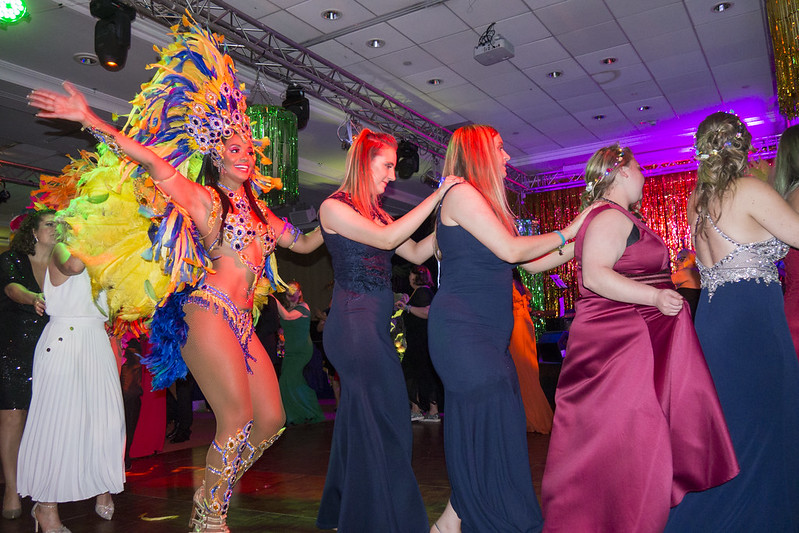 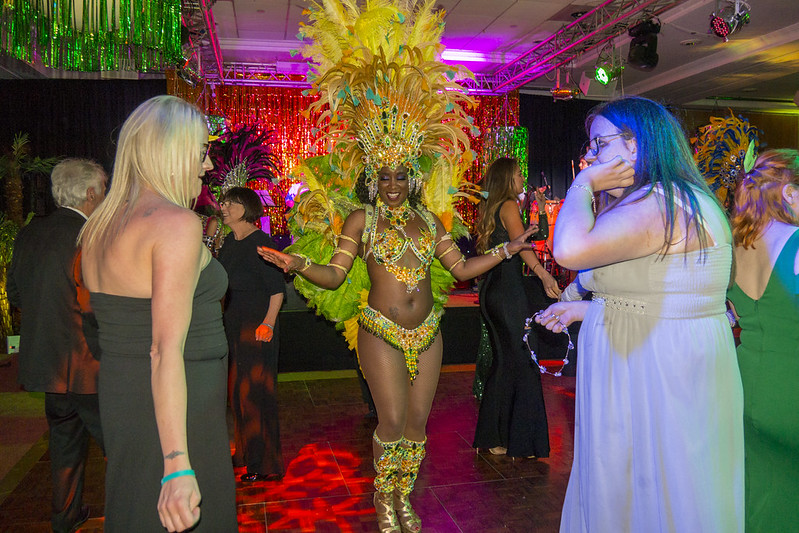 About the Author: Leigh